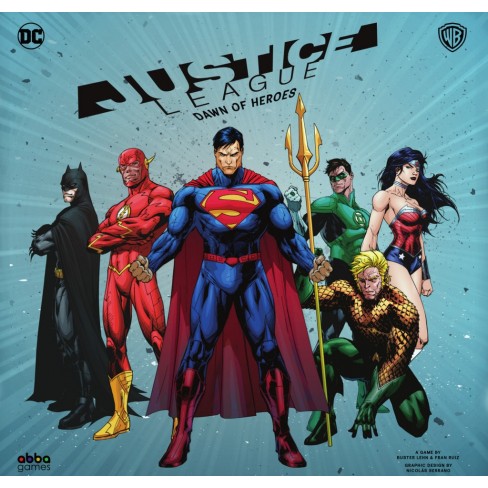 Play your favorite stories from the amazing world of DC Comics in Justice League: Dawn of Heroes, a combat-based adventure game for 2-6 players. The game is divided into missions, each with several chapters. Players are divided into two teams and will battle each other to achieve their respective goals in each chapter. The winning team earns bonuses for the final battle, a face-off between the two teams to decide the fate of the world!

With many beloved characters from the DC Universe, every mission is heavily inspired by well-known stories from our favorite team of superheroes! Take control of Batman, Wonder Woman and the rest of the Justice League to fight against Darkseid, Lex Luthor and many other villains with the Hero team. Or use your many resources to achieve your evil plan with the Villain team, with the help of Joker, Black Manta, Cheetah and many others. The player controlling Batman, for example, needs to manage their hand of cards that represents the gadgets in his utility belt, while the player using Superman will unleash his incredible, almost uncontrollable powers, by rolling dice. Other heroes like the Flash have to manage their action points each turn to perform the best action combination that will lead their team to victory.

The characters have their own set of skills that give them the edge needed to complete their goals, with customized mechanisms to control characters, giving a unique feel to each hero during gameplay to better show off their incredible powers.

Each mission can be played as a full campaign, tackling each chapter and the final battle in one session, but by using the "save system" included in the game, you can play each chapter separately and easily save your progress.