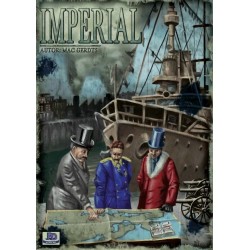 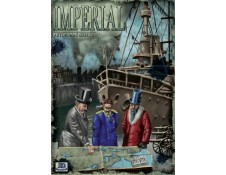 Europe in the age of imperialism. International investors try to achieve the greatest influence in Europe. With their bonds, they control the politics of the six imperial nations: Austria-Hungary, Italy, France, Great Britain, the German Empire, and Russia. The nations erect factories, build fleets, and deploy armies. The investors watch as their nations expand, wage wars, levy taxes, and collect the proceeds. Since the European nations are under the shifting influence of different investors, new strategic alliances and conflicts arise between them again and again!

Each player represents an international investor. Only he who succeeds in increasing his capital and gaining influence in the most powerful European nations will win the imperial competition.

Imperial is a varied strategy game without the luck of dice or cards. Two to six players, from about twelve years and up, take on the role of imperial investors. The duration of the game is about two to three hours.

Panamax
After one hundred years in service, the Panama Canal still is one of the most important and impressi..
219 Lei
Cumpara
Adauga in Wish List
Compara

New
Ganesha
Lord Ganesha is an Indian god of wisdom and prosperity. He is a patron of arts, sciences, and creati..
169 Lei
Cumpara
Adauga in Wish List
Compara

New
Tales of Evil
Tales of Evil is a game for 1 to 6 Braves (the name used for the players from now on) who becom..
259 Lei
Cumpara
Adauga in Wish List
Compara